MILES TO GO BEFORE MATCHING UP MY FATHER’S LEGACY
– FAISAL EDHI
The visionary & courageous man who did not take money from the government, he wished to domesticate the habit of giving in the Pakistani people. He finally succeeded. Late Abdus Sattar Edhi’s golden words, that often the people who have the least, give the most.
When he started his work, he was penniless. He sat on the street and asked for donations not for himself but to help people in greater need. “I begged. And people gave,” he said. From the very beginning, people passing Edhi on the street trusted him to do good with their money.
A man whose idea of helping & serving True Humanity came with his idea of cradle-to-grave care was like no other in the entire world. In Edhi maternity wards, more than a million babies have been delivered for free. And every day unnamed corpses of poor men, women and children are washed and buried with dignity by his workers.
For late Abdul Sattar Edhi. the cradle is the symbol of the value of human life that Edhi understood so well. More than 19,000 unwanted babies are living with new families today because of EDHI. It is almost impossible run welfare system without state resources and intervention.
But one man, Abdul Sattar Edhi, is single-handedly responsible for creating an unparalleled mini-welfare state system within the state of Pakistan. 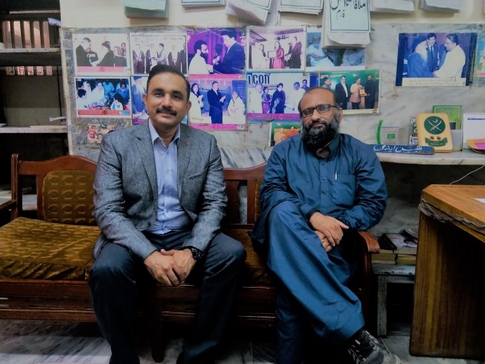 But one man, Abdul Sattar Edhi, is single-handedly responsible for creating an unparalleled mini-welfare state system within the state of Pakistan.
The list of Edhi’s achievements and contributions can take pages to fill but here is a very small glimpse of the incredible man who has been called a saint. Edhi owned two pieces of clothes, never owned an apartment, never took salary from his foundation, did not take a day off from work for than 25 years, and died in the same pair of shoes that he bought twenty years ago.
Today I met Late Abdus Sattar Edhi’s son Faisal Edhi in Karachi at the same office & same sofa corner where Great Abdul Sattar Edhi use to sit. Faisal Edhi, is undoubtedly putting his best efforts in carrying the legacy of his Father. Faisal believes he has miles to go before matching up to his father’s legacy.
Faisal is a man of ambition. Faisal wants to work on some projects first and build trust in the eyes of the public. “I have sat next to Edhi sahib on the streets to beg in the past 20 years. I will beg after having accomplished something.” Faisal says, “Edhi sahib had been working since 1951 and he worked extensively for 10 to 15 years, after which he took to the streets to beg,” he explains. “If I start begging without doing that kind of work people will think that this is just another beggar.”
Faisal Edhi operates from his office in the congested lanes of Mithadar in Karachi. Faisal Edhi says the foundation does not need charity from those who donate just for the sake of publicity. “We don’t want donations from those who just come to get their pictures clicked,” he says, his voice firm with conviction. He shares 50% of the foundation’s annual donations, which stand at around Rs1.5 billion, come from expatriates.
In near future & during the Visit of Sir Rafal Marcin Wasik General Secretary IHRC to Pakistan, IHRC will honour Late Abdul Sattar Edhi with the HUMANITARIAN AWARD & Appreciation Award to Faisal Edhi from International Human Rights Commission.