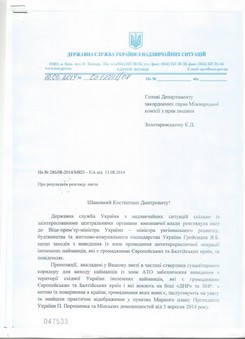 To No.   286/08-2014/MRD - UA dated 13.08.2014 On the results of reviewing the letter
Dear Kostiantyn Dmytrovych!
The State Emergency Service of Ukraine, together with the concerned central executive authorities, has reviewed a letter to the Vice Prime Minister of Ukraine – the Minister   of Regional Development, Construction and Housing and Communal Services of   Ukraine, Groysman V.B., on measures to withdraw from the area of anti-terrorist   operation (ATO) of foreign mercenaries who are the citizens of the European   and Baltic countries, and informs the following.
The proposals, contained in your letter regarding the creation of a   humanitarian corridor for the withdrawal of mercenaries from the ATO zone to   ensure the withdrawal from the territory of Eastern Ukraine of foreign   mercenaries who are citizens of the European and Baltic States and who are   fighting on the side of the DNR and LNR: with the purpose to return them to   the countries whose citizens they are, are worth   noticing and they were practically reflected in the clauses of the Peace Plan   of the President of Ukraine P. Poroshenko and the Minsk agreements of   September 5, 2014.
047533
The Tripartite Contact Group of representatives of Ukraine, the   Russian Federation and the Organization for Security and Cooperation in   Europe (OSCE) have agreed on the need for joint measures aimed at   implementing the Peace Plan of the President of Ukraine, as stipulated in the   Minsk Protocol of September 5, 2014, and provides amnesty to those who   voluntarily put down arms and did not commit serious crimes, contains  the requirement for the withdrawal of militants   and mercenaries from the territory of Ukraine.
For the purpose of implementation and practical realization of clauses   2, 5 and 10 of the Peace Plan of the President of Ukraine, fixed by the   Tripartite Contact Group, which consists of the representatives of Ukraine,   the Russian Federation and the Organization for Security and Cooperation in   Europe (OSCE), in the Minsk Protocol of September 5, 2014, as well as prevention   of further human victims, restoration of the integral life in these   territories, the President of Ukraine submitted to the Verkhovna Rada of   Ukraine a draft law of Ukraine “On prevention of the prosecution and   punishment of the persons - participants of the events in the Donetsk and   Lugansk regions”, which was adopted by the Verkhovna Rada of Ukraine on September   16, 2014 and is currently sent to the President of Ukraine (hereinafter referred   to as the “Law”).
Article 1 of the Law provides for exemption from criminal liability of   persons who committed within the period between February 22, 2014 and the day   of the entry into force of the Law, including in the territory of Donetsk and   Lugansk regions, where the anti-terrorist operation was conducted, the   actions bearing indications of crimes stipulated by the Criminal Code of   Ukraine, and who, during the commission of the said actions, participated in the   armed formations, or the persons involved in the activities of such   formations, and / or the persons who participated in the activities of   self-proclaimed bodies in the Donetsk and Lugansk regions, or resisted the   anti-terrorist operation.
The above-mentioned persons shall be released from criminal liability,   provided that before the expiration of a month from the moment the Law enters   into force, they released or don’t hold people hostage, voluntarily   transferred to the state bodies or do not keep firearms, armaments,   explosives, explosive devices, military equipment, do not occupy the buildings   , premises of the state bodies and local self-government bodies, and do not   take part in blocking the work of the state authorities, local self-government   authorities, enterprises, institutions, organizations in the Donetsk and Lugansk   regions, about which they filed a corresponding application to the pretrial   investigation body that conducts criminal proceedings.
The relevant criminal proceedings shall be closed. The criminal   proceedings initiated in connection with the above-mentioned actions, in   which no person has been notified of suspicion, shall also be subject to   closure.
Meanwhile, Article 5 of the Law states that its action does not apply   to the persons specified by part one of Article 1 and Article 2 of this Law,   which are: suspects, accused (defendants) and have not committed actions stipulated   in part two of Article 1 of this Law, and / or are suspected or accused of   committing actions that contain indications of the crimes specified by   Articles 112, 113, 115, by part two of Article   121, part two of   Article 147, by Articles 149, 152, 153, 187, 201, 258, 297, 348, 349, 379,   400, 442, 443, 444 of the Criminal Code of Ukraine, or are convicted of the crimes   stipulated by these Articles and / or committed actions that led to the fall of   the plane belonging to Malaysia Airlines, MN17 flight, in July 17, 2014 in   the Donetsk region, and / or prevented from conducting investigation into   this plane crash accident.
The law shall come into force on the day of its publishing.
Clause 10 of the Minsk Agreements contains requirement for the   withdrawal of the militants and mercenaries from the territory of Ukraine,   and the mechanism for the practical implementation of this measure is   currently being processed by the relevant authorities.
The Interdepartmental Coordination Headquarters on the issues related   to the social security of Ukrainian citizens moving from the temporarily   occupied territory and areas of the anti-terrorist operation can be involved   in the implementation of this measure within the limits of the powers   determined by the order of the Cabinet of Ministers of Ukraine dated June 11,   2014, under No. 588- p. "Issues of social security of Ukrainian citizens   moving from the temporarily occupied territory and areas of anti-terrorist   operation".
Respectfully,
Deputy Head           S.   Stoietsky
______________________________________________________________________________________________

August 13, 2014
The Vice Prime Minister of Ukraine,
the   Minister of Regional Development,
Construction and Housing and Communal   Services of Ukraine
Mr. Groysman V.B.
Dear Mr. Minister!
At one time, we addressed a letter to the Government of Serbia asking   them to give a legal assessment of the actions of the citizens of their   country who, as foreign mercenaries, take part in the armed hostilities on   the part of the terrorist organizations, and voice the Serbian Government's   position on these facts and on the actions taken by the Government of Serbia   on the question preventing in the future the participation of citizens of   Serbia in a military conflict in Ukraine as mercenaries on the side of the terrorist   organizations.
At this   time, we have a reaction from the Prime Minister of Serbia, Mr. Aleksandar Vučić, who announced the position of the Government of   Serbia regarding the citizens of the country participating in the armed   hostilities in Ukraine.
For   example, Belgrade is considering an issue on imposing a punishment on the citizens   of the country who are fighting abroad without a sanction of the authorities,   and within a month corresponding amendments to the legislation will go to the   Parliament of Serbia.
In this regard, we have taken the   lead in the creation of a "humanitarian corridor", through the third   countries, for the withdrawal from the territory of Eastern Ukraine of   foreign mercenaries who are the citizens of the European and Balkan countries   and who fight on the side of the DNR and LNR in order to return them to the countries   whose citizens they are.
This may not be applied to the persons   who have committed grave war crimes on the territory of Ukraine, but for the   majority of the mercenaries who use the humanitarian corridor and leave the   territory of Ukraine. An assessment of their actions can be given by the   international experts and governments of the countries of which they are the citizens.
We believe that the withdrawal of, for example, Serbian mercenaries through   the "humanitarian corridor" from the conflict zone can serve as an   example for pro-Russian and other mercenaries, which will eventually lead to   the de-escalation of the conflict in Eastern Ukraine.
To implement this proposal, the   Interdepartmental Coordination Headquarters, which was created in accordance   with the order of the Cabinet of Ministers of Ukraine under No. 588-r dated   June 11, 2014, may be involved.
For our part, we are ready to fully participate and make every effort   and our influence to end the conflict in Ukraine, and we ask You to consider   and support the proposal to establish a "humanitarian corridor" for   the withdrawal of foreign mercenaries from the East of Ukraine.
IHRC office in Ukraine
Secretary General
Rafal Marcin Wasik